TELEVISION IN OUR DAILY LIFE

A television set today is considered as much a part of any household as a refrigerator or a cupboard. It has become one of the most widespread forms of entertainment. Not only does it provide entertainment, but also allows us access to a great variety of information and happenings around the world. There are hundreds of channels that provide movies, music, fashion, sports or news. This has given rise to a tendency for channel surfing especially among teenagers. They cannot decide and cannot concentrate on any one program. There are channels that beam programs 24 hours a day. Whereas this may be a boon for the people who do not have much to do any way, it becomes a source of great distraction for children for whom the priority should be their studies. If parents do not monitor the programs and time spent by the children in front of the TV, there is bound to be a negative effect on their overall development.

The numerous television channels have truly brought the world into our homes. The entire world watched Obama taking his presidential oath. Now we can watch the election activities from every corner of the country. While it is good to be aware of what is happening around the world, watching programs potraying violence can have a negative impact on the sensitive and delicate minds of children. 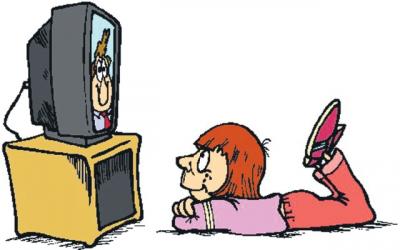 Elderly people who cannot leave the house often, like to sit before the TV and watch an old movie .  For the religious minded there are quite a few channels devoted to religion. Cricket and football fans no longer need to sweat it out in the stadium in order to watch their favourite teams play. However, in front of the TV you miss the trill and experienced in the stadium. Children can learn about people and cultures of different countries, they can watch animals in their natural habitat through channels like Discovery and Nation Geographic. But there is always the fear that the child would miss out on all the fun and adventure that can be had with a healthy open air outing.

Just as the television provides the cheapest entertainment today, it has also brought forth a lot of talent through competitions and reality shows. Whereas it is known to have created a rift amongst family members by way of arguments over which channel to watch, there are numerous times when the family enjoys a program sitting together. In short, if we keep the hours of TV watching within limits and follow a few important guidelines, then it can truly be the best from of entertainment for one and all. We must not sit too close and never watch TV in a dark room. TV should always be watched in a well- lit room lest it adversely affects the eyesight. The screen should be at eye- level and parents should definitely monitor the programs that their children watch.

One should have the will power not to be enslaved by the television.